Seen heading up the river Thames on Saturday 6th June was a rather interesting vessel.

Named the George Stephenson it is a new-build steam vessel that has been planned and constructed by a Dutch businessman by the name of Servaas Strik.

The keel was laid in November 2007 and it is coming to St Katharine Docks marina in London for her official christening on 12th June.

What makes this vessel especially interesting is the combination of using very traditional engineering techniques but more importantly making use of salvaged components from a huge variety of vessels – either directly or as raw materials.

For example, the propellers are made from a smelted down screw from the former French Navy aircraft carrier Clemenceau whilst there are doors from the RMS Windsor Castle on board. Some of the wood is also reported to have come from a former Thames paddle-boat! 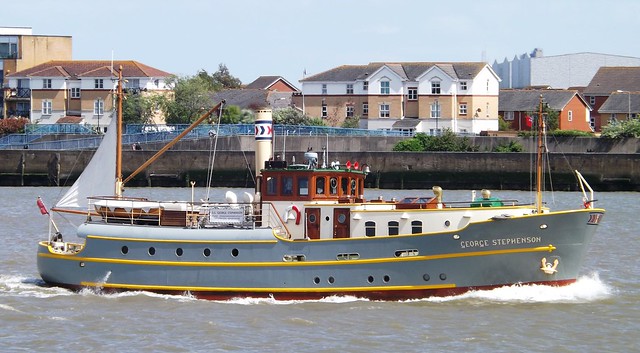 Whilst her lines might please some and offend others what cannot be denied is that a massive amount of time and effort have been put in to creating a unique piece of floating history and fitting that she has sailed along the Thames with it’s own long history of maritime engineering.

The SS George Stephenson has now left London bound for Rotterdam – as she passed Woolwich (and the Sailing Vessel Wylde Swan) she sounded her steam whistle.

6 thoughts on “Steam Ship George Stephenson on the Thames”

This site uses Akismet to reduce spam. Learn how your comment data is processed.